THE AMOUNT OF CARGO OF TURKISH PORTS DECREASED WİTH THE WAR. 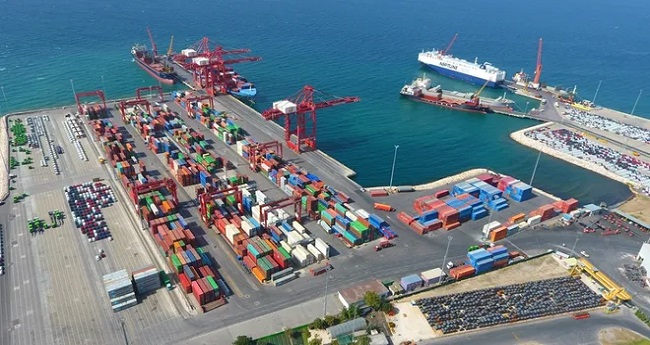 The amount of cargo handled at Turkish ports slowed down in growth. The number of containers, which has increased by more than 10 percent in recent months, increased by only 0.6 percent in March. Imported container load, on the other hand, decreased. There is also a record decline in the rate of increase in transit freight. Shipowners do not want to trade in the Black Sea due to security concerns, sanctions and high insurance fees.

The cost of the Russia-Ukraine war on Turkey's maritime transport is getting heavier. While it became increasingly difficult for shipowners to trade in the Black Sea due to security concerns and high insurance fees, on the other hand, the amount of cargo handled in Turkish ports slowed down in growth. While the number of containers handled at Turkish ports has increased by over 10 percent in recent months, this rate was only 0.6 in March. The amount of transit container handling, which increased by more than 50 percent in January, grew by only 6.2 percent in March. Imported cargo in container handling, on the other hand, started to decline.

Speaking at the April parliamentary meeting of the IMEAK Chamber of Shipping (DTO), DTO President Tamer Kıran stated that the war had a negative impact on the maritime industry and said, “On the one hand, there are Turkish-owned ships and personnel stranded in Ukrainian ports. 22 ships are stranded in Ukrainian ports. On the other hand, the security threat posed by the mines placed on the shores of Ukraine and detached from the sea continues. "It is getting harder to do business in the region day by day with the exorbitant insurance coverages for ships that intend to continue their trade with the region or the ships that are stranded in the region, and the measures, sanction decisions and restrictions announced by the USA, the United Kingdom and the European Union against Russia," he said.

Kıran said, “Due to the situation in the Black Sea, our Turkish-owned ship fleet is considering withdrawing from its commercial activities in the region. This is primarily due to security concerns, insurance guarantees, and lastly, the hesitations of Turkish ship owners or operators about possible sanctions," he said. Kıran pointed out that the number of Russian Federation flagged ships in Turkish ports has increased considerably. Russian ships cannot go to EU ports due to embargo. For this reason, many of them are waiting in Turkish ports.

Solutions to insurance and security problems are expected.

Tamer Kıran, who stated that as the Chamber, they continue to hold contacts in order to ensure the safe continuity of maritime trade in the region in close cooperation with all relevant ministries, said that they aim to ensure the control of maritime commercial activities again by ensuring the security of the Turkish-owned fleet that will operate in the region and solving the insurance guarantee problems. reported.

Tamer Kıran listed his expectations as the sector as follows: “Our Turkish-owned ships stranded in Ukrainian ports and a sea corridor for a total of 174 maritime workers, 83 of whom are Turkish citizens, must be safely exited from the war zone. Mines and similar elements detected in the Black Sea that pose a threat should be cleared, and a safe ship passage corridor should be established in Turkish territorial waters to ensure maritime trade security. The Turkish-owned ships passing through the Kerch Strait should be stopped by the Russian Federation for control reasons and victimization. Measures should be taken to ensure the safe continuation of maritime trade with the ports of Romania, Bulgaria, Georgia and our ports in the Black Sea.

Shipbuilding costs are at 10-year high.

DTO President Tamer Kıran drew attention to the record increase in shipbuilding costs. Kıran said, “The global ship fleet reached 2.2 billion DWT, increasing by 2.7 percent on an annual basis at the end of March. With the macroeconomic outlook focusing heavily on the potential impacts of inflation, much of the attention in the shipping sector has focused on the potential impacts on commodity prices and marine demand. However, inflationary trends have also become very evident in the shipbuilding industry, with newbuilding prices seeing the sharpest increase in almost two decades. The New Shipbuilding Price Index reached its highest level since June 2009, increasing by 25 points on an annual dollar basis, with 156.17 points as of the end of March.

The mines laid by Ukraine against Russian ships in the Black Sea and drifted away as a result of the storm continue to pose danger. Last week, a new mine was detected in the open of Kefk, about 50 miles from the Bosphorus. Thus, the number of detected mines increased to 6. The relevant units of the Coast Guard Command and the Naval Forces Command destroyed the mine. An important development in this regard took place the previous day. The Ministry of Defense announced that it has been determined that the trigger system of the mines destroyed in Turkish territorial waters is not locked. This brought up the allegations that the mines detected in Turkish waters did not come from Ukraine, but were deliberately left in this region. According to some experts, the reason for the mines being deposited here is to attract NOTO ships to the area. Speaking to the WORLD, Turkish shipowners see the accuracy of these claims as high. Because it does not consider it possible for the mines laid in Ukrainian ports to come to Turkey in such a short time. While these discussions were going on, the Ministry of Defense gave the good news that the detection of drifting stray mines at sea has started with the SAR-Synthetic Aperture Radars integrated into the ANKA UAV of DzKK. Industry officials demand security in the region for the continuity of trade in the Black Sea.

Imported cargo in the container decreased by 4 percent.

Global freight is on the decline, shipping from Russia is at its peak.

Freight in global markets decreased in March. In addition to the seasonal effects, the ruptures caused by the war in global trade were effective in this decline. Evaluating the decrease in freight, DTO President Tamer Kıran said that after the generally positive developments in the maritime markets in February, the Baltic Dry Cargo Index decreased by 12.3 percent to 2,069 in March, and the Tanker Index BDTI (Baltic Dirty Tanker Index) decreased by 11.7 percent to 1,279 points. The Drewry Container Index dropped 12 to 8,152. Despite this decrease in the indices, Russia-related freights in the Black Sea are constantly increasing. In the Black Sea coaster freight, while the freights in conventional coaster shipments decreased, Russia-related business increased due to the existing risks and high insurance costs. According to the Istanbul Freight Index (ISTFIX) report; Azov-Samsun's 3,000-ton shipments were $60/ton three weeks ago, compared to $70/tonne the previous week. Last week, it saw 80 dollars/ton. Source: Dünya Newspaper/Aysel Yücel

INVITE US; WE COME WHEREVER YOU WANT.
WE LISTEN TO YOUR EXPECTATIONS AND REQUESTS RELATED TO
INTERNATIONAL TRANSPORTATION AND LOGISTICS NEEDS
AND GIVE YOU DETAILED INFORMATION ABOUT THE LATEST INNOVATIONS AND SOLUTIONS.

By clicking on the box written "MEET WITH KARACA LOGISTICS" below Create an online invitation registration. In the range of the day and time you specify Let us come to your visit, meet your expectations and demands with our expertise. let's meet.